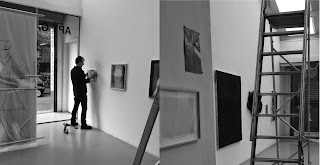 'A.P.T’s two CREEKSIDE OPEN exhibitions are a personal snapshot of the breadth and diversity of contemporary visual art in the UK today. Lisa Milroy and Richard Deacon have independently selected recent work from one anonymous submission for two shows which will be held at the A.P.T Gallery, Deptford in May and June 2015.

The first exhibition has been selected by Lisa Milroy and includes work by sixty three artists. After two days viewing over 2,100 images, Lisa responded to her selection process in a very personal way, “Following my heart in selecting work for Creekside Open 2015, I responded to the submission by exploring my own artistic interests. I felt intrigued, surprised and delighted by such a diverse, thought-provoking range of work submitted by hundreds of artists.”

A.P.T set up the CREEKSIDE OPEN in 2005 and over the past ten years it has become one of the UK's foremost open competitions for visual artists.'
Posted by The Alumni Programme at 5/07/2015 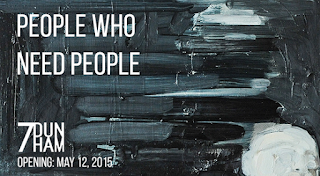 Charlie Masson has some exhibitions coming up this month in New York.

People Who Need People:
Group exhibition curated by Beatrice Shen.
'The exhibition reflects on the transient nature of modern interaction and reasserts human presence that is often lost in the day to day. Each artist confronts markers of identity and consciousness through their individualistic styles. The focus on humanity and connectivity is reinforced through each artists' hand. The culmination of the works offer unique and authentic dimensions to experiential and imaginative narratives.'

La Pasta Rigata:
'Based on products by a renowned Italian pasta producer, Masson presents for the first time this series of works created on corrugated cardboard depicting various furrowed pasta shapes, in which the exposed undulations of the support playfully mimic the subject’s ridges. The series pays homage to the simplicity of Italian cuisine, drawing influence from the Italian art movement of Arte Povera, which embraced a return to everyday simple objects and messages in art. The works displayed here in a nurturing locale are also a nod to the artist’s Italian maternal roots.'
Basta Pasta NYC, 37 W 17th St., New York, NY 10011.
May 4 - July 6 - 2015 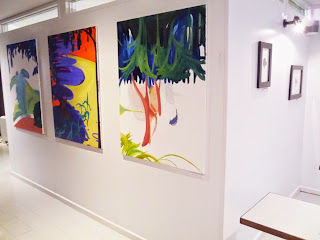 Katia Lom is having a small exhibition of paintings and prints at Curators Coffee and Gallery near Regent Street. The show will run for the next two months.


Details on how to find it are here curatorscoffee.com/locations/
Posted by The Alumni Programme at 5/07/2015

Kathryn Maple in Group Exhibition by The Violet Hour 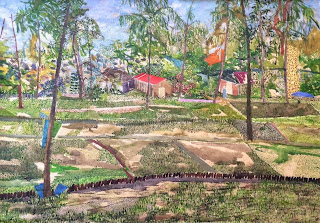 Kathryn Maple is in an upcoming group exhibition presented by The Violet Hour.

'The Violet Hour has taken inspiration from London’s Adelphi quarter for their forthcoming exhibition of five emerging contemporary artists. The title ‘Islands of the Blest’ is an excerpt from Lord Byron’s ‘The Isles of Greece’ and plays with the idea of permanence and transition.

Observations of the odd and out of place in Kathryn Maple’s layered works seem to grow from the paper. Again, the surfaces change in rhythm, with areas of clear translucency and worked, near-woven pockets. Having completed the postgraduate programme at the Royal Drawing School in September 2013, Kathryn embarked on an associated work placement and residency in India. In 2014 she was the winner of the Sunday Times watercolour prize. '
Posted by The Alumni Programme at 5/07/2015

Alice Shirley Scarf Gets a Window at Selfridges 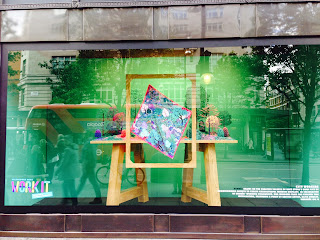 Alice Shirley has a window at Selfridges entirely dedicated to her latest scarf for Hermes.

You can see more of Alice's designs on her website, aliceshirley.com

'Surrounding the growing of corn, are the many rituals, offerings, music and dance that have evolved since man first cultivated crops. Antonia Bruce's cyanotypes capture the corn cobs that tower above the farmers. Laid against heavy duty watercolour paper which she paints with a solution of iron  compounds, the silhouettes of her subjects are developed in daylight, creating exquisite shadows on blue.


Corn is the food stuff of life, the ‘first food’ for many. The natural diversity of maize grown over thousands of years contributes to our treasured bio-diversity, and is an essential resource for mankind. Antonia Bruce has been working on a cooperative exchange between UK and Mexican artists, responding to ‘First Foods’. In Mexico’s Heartland, ‘everyman’ has a perceived right to his own plot ‘La Milpa’ - to grow his own corn, beans and squash.'