Jake Garfield (DY 2013) will be exhibiting new work at Mercer Chance in his forthcoming solo show The Real Thing which opens on 1 February (7-10pm), continuing until 11th February.

Lorna May Wadsworth (DY 2005) has a forthcoming exhibition at Philip Mould Gallery on Pall Mall. The Milliner (9-18 Feb) will feature her paintings alongside hats by Victoria Grant. Open 10-6pm Mon-Fri and on the weekend of 17th and 18th Feb (closed 10th and 11th). A special feature on Lorna's work appeared in the Financial Times' magazine last week.

Kathryn Maple (DY 2013) has two paintings in 'Fresh Paint' , the inaugural exhibition at Messums Wiltshire, which opens on 5 January at 6pm. The exhibition will continue until 4th February. Details here. 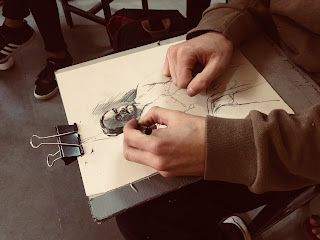 Gideon Summerfield (DY 2017) has just returned from a tour of India, which included visiting the art schools in Jaipur and Udaipur. Gideon described the trip as "an incredible experience" saying: "I was thrilled to be so welcomed and have the opportunity to join Indian art students in a life class. In addition it felt a privilege to view the extraordinary collection of Rajasthani miniature art in a number of historic and very beautiful palaces". See photos here.

Christabel Mac Greevy (DY 2017) was recently featured in I-D, the British magazine dedicated to fashion, music and art. Click here to read the online interview, in which she talks about the importance of drawing in her practice.

Sophie Charalambous (DY 2009) is showing at the London Art Fair (17-21 Jan) at Stand G2. The fair takes place in Islington and the nearest tube is Angel.

Olivia Kemp (DY 2014) has work in Borderlines, a group exhibition at James Freeman Gallery which opens on 11 January, 6,30-8,30pm and continues until 3rd February. Details here. Olivia will also be showing at London Art Fair (17-21 Jan) at stand G5. The fair is just a few minutes walk from the gallery.

Ben Westley Clarke (DY 2017) has organized a show titled 'Frivolous Convulsions', which will take place at Turf Projects in Croydon. Private view: 11 January 5-9pm. The exhibition will continue until 25th February. Open Wed-Sun, 11-5pm. Also included in the exhibition are alumni Melissa Kime and Grant Foster. The show is complemented by a series of events, details of which can be found here.

Alumnae Katie Brookes, Alison Boult, Nikki Gardham, Rebecca Harper, Kathryn Maple and Elizabeth McCarten (all DY 2013) would like to invite alumni to 'The River Project', a large-scale collaborative exhibition opening for three weeks between 8-28 January at Sun Pier House in Chatham, Kent. "Visitors will be able to take part in creative workshops, making drawings and paintings inspired by the river and imagery from the local area that will be assembled into a giant painted collage throughout January. Family drop-in days will run on Saturdays. On the evening of 26th January we are going to open our doors for the finished exhibition, which you are invited to come along and see!" Details here.

Lottie Stoddart (DY 2015) has spent the last three months in India, continuing to update her drawing and travel blog, which you can read here.

Anna Ilsley (DY 2010) would like to invite alumni to her forthcoming group exhibition 'The Reinvention of Love'. Inspired by philosopher Byung-Chul Han, the exhibition considers the importance of love and the complexities of desire we may face in today's individualistic society. PV: 20 January 5-8pm at Century Soho, 61- 63 Shaftesbury Avenue, W1D 6LQ. Please RSVP by emailing leo@centuryclub.co.uk.

Rebecca Harper (DY 2013) has paintings on show at the Galerie Nicholas Deman as part of the Paris Deco Off, for De le Cuona's new fabric launch (18-22 January).
Posted by The Alumni Programme at 1/03/2018