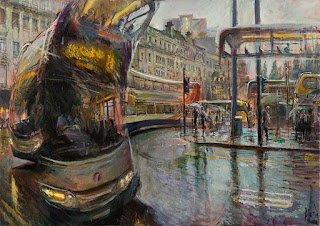 Rob Pointon (DY 2005) has a solo exhibition at Mandells Gallery in Norwich (1-28 October). Drawing lies at the core of his work, although he now works predominantly in oils. Click here for more details of the show, including a short film in which Rob talks about his new paintings. Rob has been International Artist in Residence with the Manchester Airport Group, travelling the world creating bodies of work from locations such as Hong Kong, New York, and Qatar.

Rachel Mercer (DY 2013) would like to invite alumni to her forthcoming exhibition Lady Garden, a join exhibition with Enya Lachman-Curl at Mercer Chance gallery.  The Private view is on Thursday 5 October 7-10pm.

Olivia Kemp (DY 2014) has a solo show at Browse and Darby in London from 6 October to 3 November. Details here.

An exhibition titled 'Cactus and Creatures' features artwork by nineteen emerging and established artists from both the UK and Mexico, including alumnae Claire Price (DY 2013), Antonia Bruce (DY 2004) and Rose Arbuthnott (DY 2010). The show will be running concurrently at two separate venues in London (6 October-4 November). The Private View will take place on 5 October 6-9pm. Details here. The exhibiting artists are recent participants in the First Food Artists Residency, a reciprocal, residency-based initiative for UK and Mexican artists set up by Antonia Bruce.

Drawings by Fraser Scarfe (DY 2013) and Sophie Charalambous (DY 2009) will be on display at the Triforium, Temple Church, London EC4Y 7BB, in an exhibition of selected finalists from the last five years of the Discerning Drawing Bursary. Alumni are invited to the Private View which will take place on Tuesday 10 October 7-8,30pm. Download invitation here. The exhibition will be open until 26th October.

Fraser Scarfe also has work in ‘The Unexpected Show’ at The Usher Gallery in Lincoln (until 15th October).
Posted by The Alumni Programme at 9/13/2017